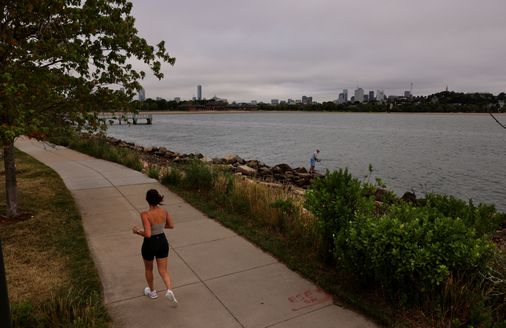 But will this be enough to avert disaster?

Waterfront advocates aren’t so sure. They are happy that the developers are taking the matter seriously. But they worry that a project-by-project approach will leave swathes of Boston’s waterfront and lower interior neighborhoods vulnerable. Then there is the question of fairness: what if flood protection is first built for luxury housing and expensive offices, while defenses elsewhere are deferred?

Get the pace of innovation

The Boston Globe’s tech reporters tell the story of the region’s technology and innovation industry, highlighting key players, trends and their importance.

“In times of desperation, I say, ‘Oh my God, how are we going to get there?’ said Bud Ris, former chief executive of the New England Aquarium, which champions waterfront resilience efforts. “The water is rising everywhere. We have to plan for this. The most essential question is not where to start but: who is going to pay and who benefits?

City officials said they were working hard to protect key public parks and the City-owned Raymond L. Flynn Marine Park in the Seaport. But many of the greatest resilience proposals depend on private sector developments. It’s an approach that began under former Mayor Martin J. Walsh, and new Mayor Michelle Wu has made it clear that new waterfront development must keep climate change in mind.

The stakes are enormous. The 2016 “Climate Ready Boston” report predicted up to 3 feet of sea level rise in Boston Harbor by 2070, from 2000 levels, and possibly 7 feet by 2100 And by the end of this decade, there will be at least a 1 percent chance each year of a severe flood that could inundate up to 2,100 buildings and cause damage of $2 billion or more. The citywide report and several related neighborhood-specific plans offer dozens of solutions, but the collective price could easily top $1 billion to $2 billion.

Boston has so far dodged the kind of disaster that hit New York with Superstorm Sandy in 2012. But a storm in the winter of 2018 underscored the city’s precariousness, with rivers of seawater flowing through the streets of Seaport and a viral video of a dumpster. in front of the brick and beam buildings of Fort Point.

Something else happened that year that received less attention but was no less important: researchers at UMass Boston, led by Professor Paul Kirshen of the School for the Environment, determined that a massive flood barrier in Boston Harbor was not worth it. The barrier, Kirshen said, would require a public works project on the scale of the Big Dig, and likely wouldn’t be complete until 2050. Boston needs protection long before then. Also, a huge barrier, while useful in storms with high surges, would do little to prevent high tide flooding. The researchers urged public officials to focus now on more natural solutions that could provide ecological benefits and reduce flood risk.

Enter the Boston Planning & Development Authority. Last year the BPDA issued new zoning rules for the waterfront and around 5,000 acres of the city – including most of the South End and part of the Back Bay – which would be at risk from flooding. coastal. The agency has established a baseline elevation point for new construction that assumes a potential sea level rise of 40 inches during a severe storm and requires that living space in residential buildings be at at least 2 feet above this point. (Commercial buildings could be lower with flood protection measures.) This would essentially mean new construction being built nearly 22 feet above the low tide line.

The BPDA secures a $10 million federal grant to help fund a $20 million berm along the east side of Fort Point Channel, where a series of new buildings are being constructed on the parking lots was previously part of the Gillette campus. Meanwhile, in the Flynn Industrial Park, the BPDA begins to funnel money from long-term land leases into a new fund for a major seawall.

The city is also bolstering riverfront parks as they are renovated — like Langone Park in the North End and Ryan’s Playground in Charlestown — designing them to act as barriers during storms. The biggest will be Moakley Park in South Boston, which is due for a $250 million overhaul over the next decade, in part to prevent flooding in neighborhoods behind it. The elevation of the park would rise from the beach, but gradually it is barely noticeable.

Next to Moakley, Accordia Partners and Ares Management are planning a six million square foot development for their Dorchester Bay City project, primarily on the site of the former Bayside Expo Center. Nearly half of the project’s 36 acres will be open space, much of which will rise nearly 22 feet above the low-water mark. A new stormwater management system will be constructed and portions of the existing harbor promenade will be raised alongside the neighboring Harbor Point residential complex. In total, Accordia estimates that the development contribution to this resilience work will cost approximately $70 million.

“The private sector is not only going to be part of the solution, it’s also going to drive the solution,” said Accordia Director Dick Galvin.

In Charlestown, developer Flatley Co. has similar plans to shore up a vulnerable stretch of shoreline behind the Schrafft Center, as part of a 25.5-acre redevelopment it plans there. They will augment the work next to Ryan Playground with a half-mile resilience project that includes a waterfront walkway and steps to the Mystic, building a protective barrier against seawater that might otherwise reach slums as far east as Cambridge and Somerville. It would obviously be cheaper to simply build a flood wall to protect the Flatley site, said managing director John Roche; instead, the more extensive landscaping work will add tens of millions of dollars to the development cost.

But developers have an important incentive to think broadly about resilience: It makes them dear to city and state regulators who ultimately decide what they can build.

While proponents say these projects represent a promising start, they point out that there is still so much to protect.

“You have a bunch of properties that are on islands of resilience,” said Deanna Moran of the Conservation Law Foundation. “It doesn’t help anyone if we get hit by a huge storm.”

Moran said she would prefer to see more public funds funneled into broader efforts, particularly if the construction boom slows and new projects stall. Funding could come from an increase in the deed excise tax or a property tax for all major properties in a particular waterfront area, much like how business improvement districts operate today.

“I get nervous that we see redevelopment as the number one source of funding for climate resilience,” Moran said.

“The majority of developers we talk to and hear about take this very seriously,” Abbott said of sea level rise.[But] we cannot rely solely on the private sector.

As growth continues, Abbott hopes to avoid gaps in the seaport, where projections indicate billions of dollars in new developments could face routine flooding. Policymakers, she said, need to have in-depth discussions about which riparian patches should be developed, which should not, and how to make them all more resilient.

Kirshen, the UMass Boston expert, said there are some advantages to a neighborhood-by-neighbourhood approach, especially in a city like Boston with an existing plan for areas that need protection.

“The city knows what needs to be done and when it needs to be done,” Kirshen said. “The challenge the city is facing right now is how to fund it. . . Where will this money come from? It will come from these public-private partnerships.