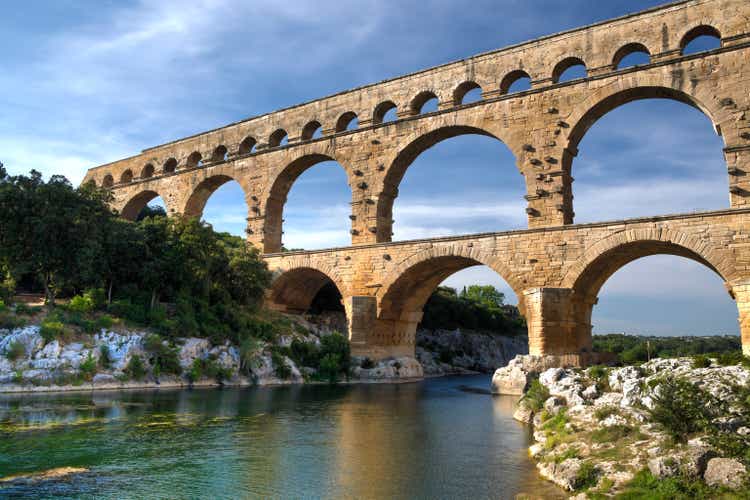 I’m basically 100% invested in real estate and people often tell me it’s risky to be so focused.

I don’t see it as risky, nor as focused.

In fact, I think a well-balanced REIT portfolio is fully diversified. Part of the beauty of real estate is that it comes in so many different forms, many of which counterbalance each other. Real estate is the infrastructure of society and its continued success is based simply on the following:

Since the dawn of civilization, real estate has flourished wherever humans have flourished. There have been and there will still be bumps in the road, but the long term trajectory has been positive for millennia and my total real estate investment is simply a bet that this 5000 year trend will continue.

Some of the greatest investments in history have been real estate

In 1803, the United States purchased much of what is now the United States from France for about $18 per square mile in what is known as the Louisiana Purchase. Back then, it obviously wasn’t a bargain, but now it seems ridiculously cheap, even taking inflation into account.

I postulate that at any point in history one could have purchased a real estate portfolio diversified by location and function and its value would have increased 10, 15 or 20 years later. This even applies to real estate purchased during cyclical peaks. The housing bubble of 2005-2007 was a terrible time to buy a home, but even when it was purchased at the absolute peak of the bubble, it turned out to be reasonably okay.

There have been many cases of catastrophic failures in real estate. Most of them, however, were the result of concentration or leverage.

Those who bought homes during the housing bubble did well if they could hold out today. The real problem came for those who bought with a loan over 80% and found themselves underwater as soon as prices fell.

Individual locations can also fail. Around 15-18 years ago, man-made islands off Dubai were the subject of huge hype, with developers rushing to dredge the ocean, build protective barriers and build luxury islands for use. private or commercial.

These quickly failed when the financial crisis hit, temporarily dampening demand, and they never really recovered due to location-specific issues. The erosion of the man-made islands proved to be an ongoing challenge and the appeal quickly dropped as the public became more environmentally aware of the damage to marine life caused by dredging and interference from the patterns of natural tidal barriers.

Most problems with home ownership can be avoided by following three basic principles.

Let me dive into this third one a bit because I think it’s one of the most overlooked aspects of real estate.

Many people see real estate as a boom and bust because they look at individual properties in individual locations. At the global level, the demand for real estate is much more stable and growing continuously.

When demand for one type of property drops, another type takes over.

True, but the benefits to other types of real estate outweigh this loss by orders of magnitude. Shopping center REITs fell, some of them permanently, but industrial REITs soared. The overall gains of industrial REITs dwarf the market capitalization lost in bankrupt malls.

Looking ahead, the net gains look even more pronounced as shopping centers have stabilized somewhat, Simon Properties (SPG) returning to growth and demand for logistics real estate is just beginning. CBRE estimates that an additional 138 million square feet of warehouses will be needed by 2025.

A similar net benefit can be seen in the shift to remote work. There may have been a slight reduction in office space as some companies move to three days in the office and two days at home, but I think people often overlook the amount of real estate involved with remote working .

Living spaces becoming central to people’s lives have increased the demand for quality apartments. If you have a home office, you need a little more square footage. For those who already have the square footage, this room that was once used for storage is being converted into a home office. Overall, this means greater demand for apartments, single-family homes and self-storage.

The technology behind working from home also requires real estate.

Offices have always needed a good connection, but until recently, home connections were largely of poor quality. Video conferencing has clearly shown the world how important a strong connection is and it is one of the many factors inspiring a massive build-out of fibre-to-the-home, 5G connections and addiction to unlimited data.

All of this requires real estate for return transportation.

Moreover, all this data that travels through the cloud has to be processed somewhere and the task relies on a massive construction of data centers which are also REIT assets.

I don’t think office is a great sector right now, so I’m significantly underweight office. The vacancy rate will remain high for some time and developers are strangely still building offices, which could further weigh on the sector. However, the downsides for offices are completely outweighed by the massive growth that has occurred and will continue to occur in fiber, towers, data centers and apartments.

Just like with malls versus warehouses, I encourage you to check the numbers. The loss in value in offices is dwarfed by the gigantic gains in data center REITs, tower REITs, apartment REITs and storage REITs. A few decades ago, technology REITs barely existed and today American Tower (AMT) and Equinix (EQIX) are two of the largest and most successful REITs.

There will always be shifts in the mix of what real estate is hot at any given time, but the story is very consistent:

If the GDP increases, the demand for real estate increases.

4and real GDP growth for the quarter has just been announced at 6.9%, considerably exceeding estimates.

Human prosperity has been rising for a long time and that means REITs have won. Over the very long term, REITs have significantly outperformed the S&P and I think they will continue to gain.

But maybe it’s different this time?

I understand there are a lot of not-so-good things going on right now:

Watching the news, it’s easy to become pessimistic about the future, but I think that would be underestimating how difficult it is to bring about an inflection in a trend of positive progress that has been going on for thousands of years. .

We humans do a lot of stupid things today, but I think an honest look at history reveals that we did some incredibly stupid things that were far worse.

If world wars and bubonic plague couldn’t derail the upward progress of human prosperity, I seriously doubt that COVID and petty Twitter feuds will stop us.

Thus, by holding a diversified portfolio of real estate assets, I am not betting on a particular event, but rather on general progress.